Randomly, Tom and I decided to leach on to our friends’ trip to Milwaukee.  I’m actually not sure if we were ever invited but I’m pretty sure this is one of the few instances that drunk plans actually fruitioned.  They were going to see Jack White and Tom and I were going just to hang out in Milwaukee.  It’s an hour away and we figured this was the easiest vacation ever.  Plus, these friends that we met there are pretty great to day drink with.

Friday night we arrive at the hotel that Kurt picked out – The Milwaukee Athletic Association.  Now, the Chicago version of this club/hotel is super fancy.  They just renovated it and it is one of those places that is a hot spot for happy hours and tourists.

The Milwaukee Athletic Association is much different.  It’s the kind of place that you assume more ghosts are in than actual people.  Right when I walked through the front door, I could taste the dust.  The hallways are dark and moist.  We get to our room on the 12th Floor and the room seems ok.  However, the closet was basically a concept and the bathroom reminded me of what you use when you are at a camp as a child.  When we pulled back the curtains, we noticed that someone had drawn a bunch of dicks in the dirt on the window. Cool!  Love a good dick drawing.  I’m already having a good time.

While Kurt and Julia rocked out at Jack White, Tom and I went to dinner at Merriment Social, located in the Historic Third Ward.  They had fancy bar food which is right up my alley.  You know, like burgers that are laced with some chimichurri aioli.  The place itself looked like it had been a car garage but they renovated it to be a hipster bar.  That is essentially every place in my neighborhood.

After the concert, we met up with Kurt and Julia, who had just taken a ride from a cabby named “That”, over to a bar near our hotel.  It was a classic dark pub called Swingin Door Exchange.   The time had to be around 11:30 PM and as I sipped on my Spotted Cow beer I noticed how drunk everyone else was around us.  I later refer to this as “Milwaukee Drunk”.  I watched an older woman in a very short baby blue dress grab the hand of another man at the bar and put it right between her legs.  On the other side, I could hear a man telling his friends that he truly believes the Packers are the greatest team on the planet.  THE PLANET.  When I went to the bathroom, the woman coming out looked at me and goes “I can never find the handle……they always hide the handle!”.  Soon after this, Julia and I went back to the hotel to get some sleep before our 5 mile run the next day.

Woke up to jack-hammering.  CONSTANT JACK-HAMMERING.  What the hell?  I looked out the window to see the smallest construction site somehow making the loudest jack-hammering noise in the city.  So I’m up now.  Julia and I went down to the ghost café in the lobby and had a coffee.  We talked for awhile and decided we needed to take care of this 5 mile run much like you rip off a band aid.  We planned to run along the river but then found ourselves on the lake.  It was a great run which ended at Harp for a bloody mary.

Runs that end with a bloody mary are the best runs

After getting back to the hotel and getting ready we all started our day at Lakefront Brewery.  They have a great amber beer there now called Riverwest Stein.  We watched a bunch of tours start and even a wedding come through.  I had just bought a selfie stick and was dying to use it but no one aside from Julia seemed excited about this.  So instead we had someone take a picture of us on the phone. 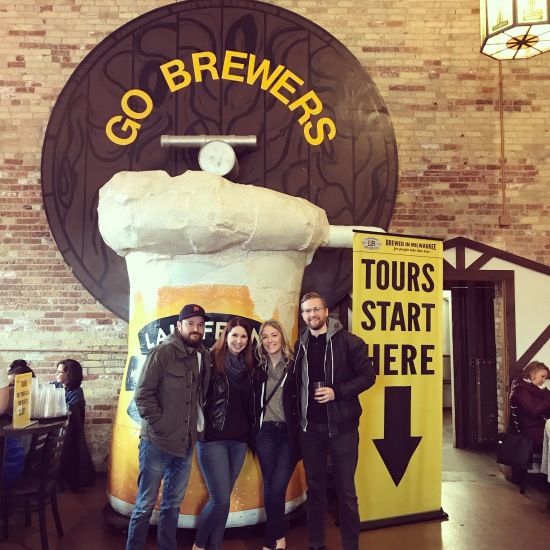 After Lakefront, we walked down to Hi Hat on Brady and ended up sitting up stairs in our own little corner. We had several beers here.  We played a bunch of games which was really Julia asking us all random questions and each of us going through and answering them.

Hours, and several inappropriate public jokes, later, we walked to our next place, The Standard Tavern.  This was just one of those neighborhood bars. The kind you see dogs in.  This is actually the bar I liked the most only because of how small and dark it was.  I look my best in dark lighting.

When we left there, we went to eat and after that, Kurt and Julia turned into ghosts similar to the ones surely living at our hotel.  Tom and I split off from them and had one last beer at Mo’s Irish Pub.  The place was a shit show.  There was a band playing there and every single person was hammered.  Milwaukee hammered is on another level.  I watched a woman in her 40’s dance around in front of the band and occasionally squat down and hump the floor.  At one point, when the band took a break to figure out the next Bon Jovi cover they would do, she yells “Come on fuckers, I wanna hear more!”.  She was amazing to watch….I love a good train wreck.

It was a great weekend in Milwaukee.  The best part being that it was only an hour drive home.  It seems the older you get, your friends kind of drop off like flies in their willingness to do a day drinking type weekend somewhere.  Eventually, I’m sure, Tom and I will also drop off but hoping that we have people like Kurt and Julia that will be there too at that point.  Friends who drink together drop off the radar together?  =)